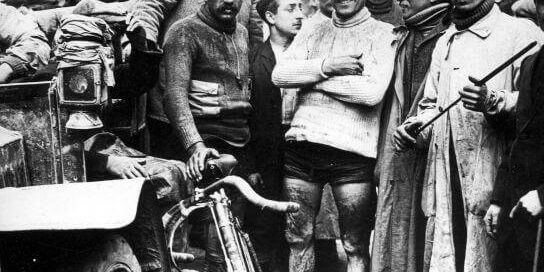 1903 Tour de France – Stage 6Â started at 18:00 in the city centre of Nantes. There was a huge crowd in attendance. After the events of the previous day Garin is booed whileÂ Augereau was applauded and cheered. As the race left Nantes hundreds of other cyclists rode along along with the racers. A very fast pace was set from the start with the riders averaging 30 km/h for the first few hours. During the night around 03:00, there was an accident involving 2 motorbikes which were following the race. One of the motorcyclist was fatally injured.

Racing was banned in the city of Paris so the sprint finish for the stage was Ville-d’Avray to the west of the city. It was 14:09 in the afternoon when the first 8 riders arrived to contest a sprint which was won by Garin withÂ Augereau in Second. The riders then went on to Parc des Princes where they road 2 ceremonial laps in front of 20,000 paying spectators.

At the age of 32 Maurice Garin made history by winning the first Tour de France. The following day he returned by train to his home town Lens, where he was paraded through the streets in triumph. Garin’s average speed for the entire route was 25.6 km/h. He lost 2.5kg during the race. After retiring from cycling Garin ran a garage in Lens. He died in 1957.

The last placed rider wasÂ ArsÃ¨neÂ Millocheau who finished almost 61 hours slower than Garin at an average speed of 15.7 km/h. Millocheau was 36 years old at the time and had had a very successful career behind him. He had participated in the first Bordeaux-Paris and the first Paris-Brest-Paris, a grueling 1200 km event, in 1891. He completed his last Paris-Brest-Paris in 1921 aged 54. He ran a bike shop in Paris until his death in 1948.